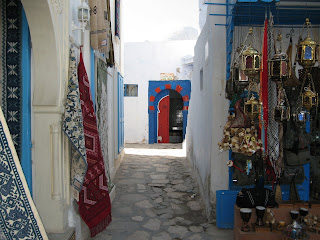 I am recently back from North Africa, where the Attorney General signed the first Mutual Legal Assistance Treaty (MLAT) with Algeria -- a document of historic significance which will implicate comparative law in its own way. The region is a fascinating one and, as many of you know, heavily influenced by its colonial past in its linguistic and legal culture. A variant of the continental civil law exists in every country of North Africa and, structurally, each legal system in question adopts the same codal duality that broadly characterizes civil codes in the region -- the law of obligations and property being contained in legislation which is separate from the "personal status law" relating to marriage, divorce, other aspects of "family law," and inheritance. Criminal law, likewise, mirrors French law to a great extent with the "inquisitorial model" firmly in place (which makes use of the investigative judiciary and other mechanisms familiar to continental European practitioners.)
In any event, it is an item of historic significance worth noting:
Attorney General Holder Signs First Criminal Law Enforcement Agreement Between United States and Algeria
Attorney General Eric Holder and Algerian Minister of Justice Tayeb Belaiz today signed a treaty between the United States and Algeria on mutual legal assistance in criminal matters, the first ever criminal law enforcement agreement between the two countries. The treaty strengthens the two countries’ common efforts in the fight against terrorism and transnational crime by enabling the most modern procedures for law enforcement cooperation.
"The proliferation of both terrorism and traditional criminal acts across national borders makes international cooperation essential to bringing to justice those who threaten our safety and security," said Attorney General Holder. "
Algeria is an important partner in the fight against terrorism and transnational crime. This treaty will help us ensure that terrorists and other criminals are not able to avoid justice by simply hiding evidence beyond our borders." The mutual legal assistance treaty, or MLAT, will be an effective tool in the investigation and prosecution of terrorism, cybercrime, white collar offenses and other crimes. Among other tools, the treaty will help law enforcement officials from the two countries obtain testimonies and statements; retrieve evidence, including bank and business records; provide information and records from governmental departments or agencies; and provide a means of inviting individuals to testify in a requesting country.
The formal treaty signing took place at the Ministry of Justice in Algiers, Algeria. Additional representatives from the Department of Justice and the Algerian Ministry of Justice attended today’s ceremony. To date, the United States has negotiated and signed more than 50 bilateral MLATs with law enforcement partners around the world.
Posted by Dan E. Stigall at 10:25 AM